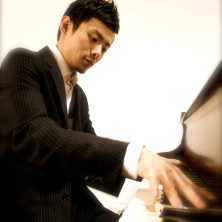 Takeshi Ohbayashi is a jazz pianist based in New York City. He performs regularly as both a band leader and a sought after side man. In addition to leading his own trio, Ohbayahi also co-leads the New Century Jazz Quintet with Grammy award winning drummer Ulysses Owens Jr.

Takeshi Ohbayashi was born and raised in Hiroshima, Japan and began playing the piano at age 2. Ohbayshi studied the trumpet in high school and film scoring and composition at Tokyo College of Music but his interest in jazz was not sparked until he attended a jazz piano clinic during his freshman year. He went on to study at the Berklee College of Music where he ultimately was chosen to be part of the opening class of the Berklee Global Jazz Institute. After graduating in 2011, Ohbayashi moved to New York and began playing around the city.