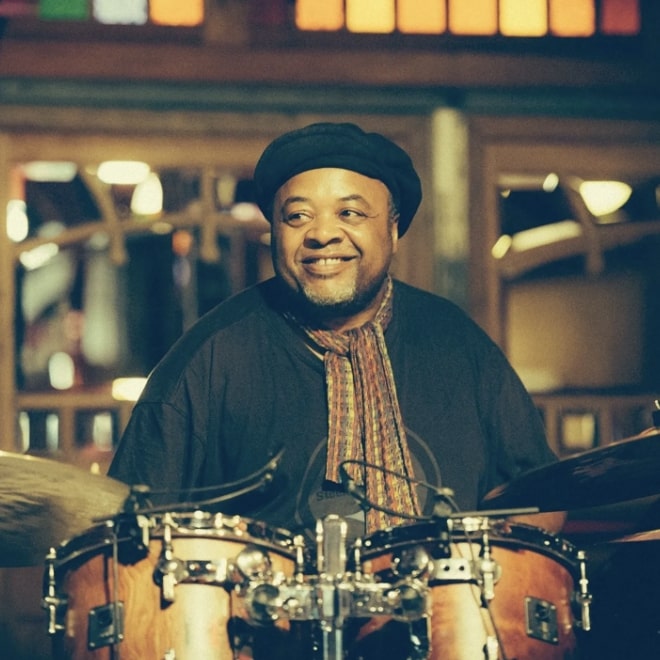 Jeff "Tain"Watts is a Grammy-winning jazz drummer, composer and band leader. Watts is closely associated with both Wynton and Branford Marsalis and appears on all of their Grammy winning jazz records. He was a member of Wynton Marsalis' group from 1981 to 1988 and then joined Branford's group in 1989. He also played with Branford Marsalis in the Tonight Show Band. Watts began leading his own groups in the 1990s but continued to be a highly sought after sideman, working with artists such as Betty Carter, Michael Brecker, George Benson, McCoy Tyner, and Harry Connick Jr. As he has matured, Watts has grown more interested in composition and mixing and matching his musical influences.

Jeff "Tain"Watts was awarded a Guggenheim Fellowship for Music Composition in 2017. Jeff "Tain" Watts played the part of Rhythm Jones in Spike Lee's film "Mo Better Blues." Watts was given the nickname "Tain"by Kenny Kirkland after the band stopped at a Chieftain gas station.

Jeff "Tain"Watts was born in Pittsburgh, Pennsylvania in 1960. He began playing the drums in 4th grade. As a student Watts participated in every music program available, including concert bands, orchestras, marching bands and drum corp. Watts studied classical music at Duquesne University and where he specialized in the timapni. After two years at Duquesne he transferred to the Berklee School of Music in 1979. There he met musicians such as Branford Marsalis, Kevin Eubanks and Donald Harrison and decided to switch his focus to jazz. In 1981 he moved to New York to become a member of trumpeter Wynton Marsallis' ensemble.