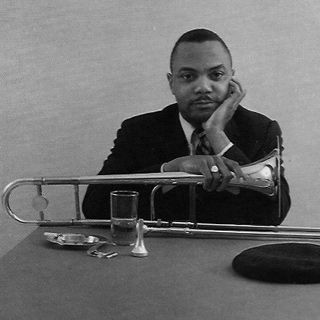 Known for his dexterity and fluency, J.J. Johnson is considered by many to be one of the greatest trombonists of all time. Throughout the 1940s and 1950s he played with top jazz musicians including Charlie Parker, Dizzy Gillespie, and Miles Davis and well as leading his own groups. In 1954 he formed a popular quintet with trombonist Kai Winding. In the late 1950s Johnson began focusing on composition and wrote several long-form pieces including “Poem for Brass,” “El Camino Real” and a piece for Dizzy Gillespie called “Perceptions”. He went on to score several television soundtracks in the 1970s and then returned to touring in the 1980s. Johnson performed regularly throughout the 1990s until the 2000 when he was diagnosed with prostate cancer. Sadly, J.J. Johnson died by suicide in 2001.

J. J. Johnson played with such dexterity that some listeners believed he was playing a valve rather than slide trombone. J.J. Johnson took a break from performing in 1952 and worked as a blueprint inspector for two years. J.J. Johnson was named a NEA Jazz Master in 1996.

James Louis Johnson was born in 1924 in Indianapolis, Indiana. At age 9 he began studying the piano with his church organist and then picked up the trombone at age 14. Johnson began his professional career in 1941 and played in a series of big bands, including those led by Clarence Love, Snookum Russell, and Benny Carter. In 1945 he joined Count Basie's Orchestra.