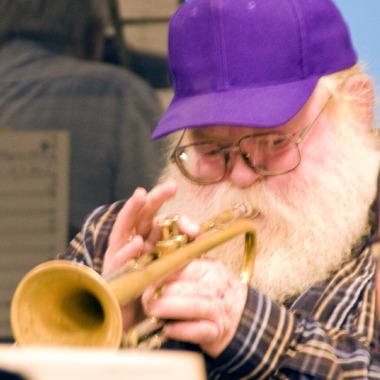 Ron Stout is a Los Angeles based jazz trumpeter, band leader and educator. Ron Stout is known for playing straight ahead jazz and was a member of the Woody Herman Orchestra from 1984 through 1990. In the early 1990s he spent 3 years playing with Horace Silver and also performed with Les Brown’s Band of Renown, Frank Capp’s “Juggernaut” and The Clayton/Hamilton Jazz Orchestra among others. Ron Stout has worked with popular musicians including the Supremes, The Temptations and Righteous Brothers. Stout has been involved with music education since 1978 teaching private lessons, clinics and also was on faculty at the Bob Cole Conservatory of Music, Cal State Long Beach.

Ron Stout's debut CD came out in 2005 and is titled "For Chet & Other Heros." Ron Stout has said that hearing Freddie Hubbard play live on his 13th birthday "changed me forever."

Ron Stout was born in La Puente, California in 1958. He was born into a musical family, His mother was a classical pianist and his father, was a jazz tenor saxophonist. Stout showed an interest in music from an early age and started playing the coronet at age 8. He joined the Musicians Union at age 15. Stout studied music at Orange Coast College and then Golden West College and frequently won awards at statewide music festivals.