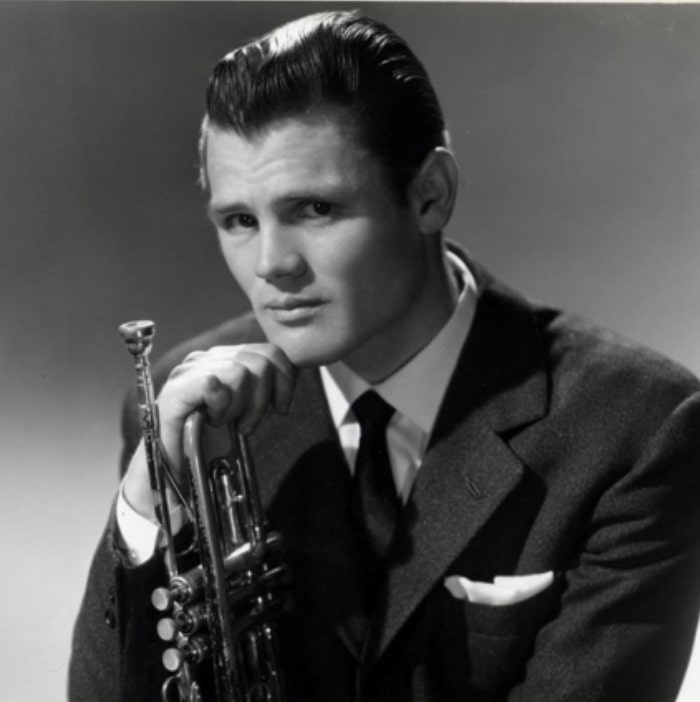 Chet Baker was a jazz trumpeter and vocalist known for the beauty of his tone and overall cool vibe, but also for his struggles with addiction. His early career was promising, in 1952 he joined the Gerry Mulligan Quartet and released his version of "My Funny Valentine." He went on to form his own quartet releasing popular albums, touring Europe and winning reader's polls in Down Beat and Metronome magazines. By the 1960s, however, his struggles with heroin addiction took a toll on his career leading to jail time and a mugging that cracked his teeth. In the 1970s and 1980s, after retraining his embouchure, he had a career comeback, reuniting with Gerry Mulligan and resuming performances in Europe. He died at the age of 58 after falling from a hotel window.

Chet Baker acted in the movie "Hell's Horizon" in 1955, but turned down a studio contract in order to continue his life as a musician. During most of the 1960s Chet Baker played the flügelhorn rather than the trumpet. Chet Baker plays the trumpet solo on the 1982 Elvis Costello song "Shipbuilding."

Chesney Henry Baker, Jr, known as "Chet" was born in Yale, Oklaholma in 1929. His father was a semi-professional guitarist and his mother worked in a factory. As a child Baker sang in church and talent shows. When he was 10 years old his family moved to California. His father gave him a trombone, but is was deemed too big for the small framed Chet and he traded it in for a trumpet. Baker played in his high school band but dropped out of school when he was 16 and joined the Army. After two 2-year stints playing in the Army Band, Chet left to pursue music professionally. He returned to Los Angeles where he played locally before earning a spot in Charlie Parker's West Coast Tour.