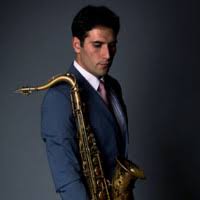 Sam Dillon is a New York based jazz saxophonist, composer and educator. He has appeared on over 20 recordings and released his debut album, “Out In The Open” in 2018. Dillon performs with The Jimmy Heath Big Band, The Slide Hampton Octet, and The Mingus Big Band among others. He also serves as the Jazz Director at USDAN Summer Camp For The Arts, Woodwind Teaching Artist for the New York Pops and saxophone instructor for the Juilliard MAP program.

Sam Dillon's interest in jazz was sparked by hearing the theme for Pink Panther as a child. He was semifinalist in the Thelonious Monk International Saxophone Competition in 2013. Sam appears in the HBO series “Boardwalk Empire” playing clarinet.

Sam Dillon was born and raised in New York. He started playing the saxophone in 4th grade and played his first gig at age 14 with legendary trombonist Al Grey. During high school he participated in various jazz programs and was a member of the New York All State Jazz Band. Dillon received a scholarship to the University of Miami Jazz Program and went on to complete his degree at SUNY Purchase College, earning a Masters Degree in Jazz Performance in 2009. He later received an Artist Diploma from The Juilliard School.