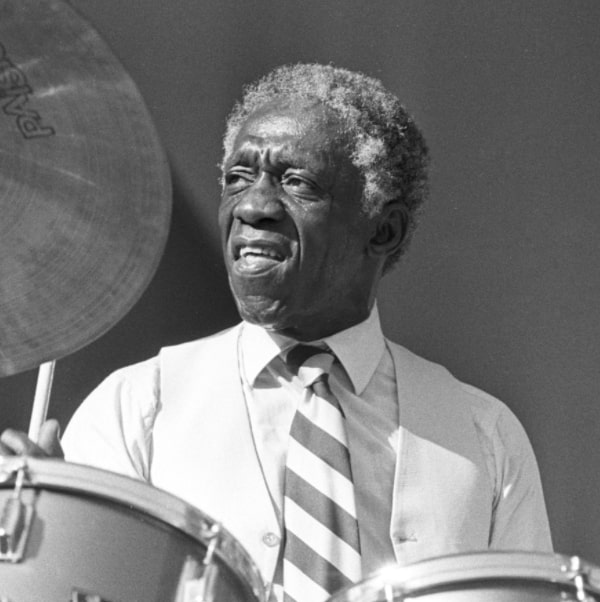 Art Blakey was a jazz drummer and bandleader and is considered one of the inventors of the modern bebop style of drumming. After playing with some of jazz's best known musicians in the 1940s, Art Blakey began working with pianist Horace Silver. In 1955 they co-founded the Jazz Messengers a band Blakey would continue to lead over the next 35 years. The original Jazz Messengers included Silver, Blakey, Hank Mobley and Kenny Dorham, but over the decades it served as an incubator for up and coming jazz musicians including at various times Lee Morgan, Wayne Shorter, Wynton Marsalis and Keith Jarrett. Art Blakey continued playing until shortly before his death from lung cancer in 1990 at the age of 71. He was awarded a Grammy Lifetime Achievement Award in 2005.

In the early 1940s Blakey was attacked by a Georgia police officer resulting in a steel plate in his head and a medical exemption from military service. Art Blakey spent 2 years in Africa and briefly converted to Islam. In his later years Art Blakey had hearing loss, but refused to wear a hearing aid because it threw his timing off.

Art Blakey was born in Pittsburgh in 1919. He learned the piano as a child and by 7th grade he was playing piano professionally. In the early 1930s he switched to drums, possibly at the insistence of a nightclub owner who wanted to give the piano job to Erroll Garner. In any case, Blakey quickly mastered the drums and by the 1940s was playing with Mary Lou Williams and the Fletcher Henderson Orchestra. In 1944 he joined Billy Eckstein's group playing with musicians such as Dexter Gordon, Miles Davis and Charlie Parker. Blakey stayed with this group until it disbanded in 1947.