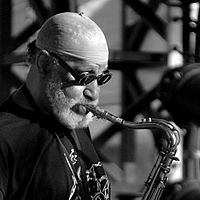 Sonny Rollins is an American jazz saxophonist and composer and widely regarded as one of the genre's finest improvisors. Over his 7-decade long career Rollins has played with many of jazz's greats including Miles Davis, Coleman Hawkins, Max Roach and Thelonius Monk. He made over 60 recordings as leader and pioneered the piano-less trio on albums such as "Way Out West" and "A Night at the Village Vanguard." Rollins has been awarded numerous honors, most notably a Lifetime Achievement Award from the National Academy of Recording Arts and Sciences, the Edward MacDowell Medal and the Medal of Arts from President Barack Obama. Rollins was forced to stop playing the saxophone in 2014 due to respiratory issues.

Sonny Rollins was given the nickname "Newk" because he resembled Dodgers pitcher Don Newcombe. Rollins often practiced on the Williamsburg Bridge and titled his 1961 album "The Bridge." During his long career Rollins took several sabbaticals to focus on music, health, and spirituality, including spending time in an Indian monastery.

Sonny Rollins was born Theodore Walter Rollins in 1930 in New York. He grew up in Harlem, the epicenter for jazz, not far from the Savoy Ballroom and the Cotton Club. After begging his mother for a saxophone Rollins received his first alto at age 7 and switched to playing the tenor in high school. After graduating Rollins immediately began working professionally making recordings with bebop singer Babs Gonzales and Bud Powell.